It’s okay to say it. We’re all pleased that Winter 2017 is starting to reach it’s concluding episodes – for the majority of shows over the last two and a half months, the final three or four episodes will be not be an exhilarating, action packed, high tension, satisfying  conclusion to be savoured but instead will pass most of us by disappointingly wasting 25 minutes every week as they have done for the most of the season.

Maybe I’m being a little harsh, but when you compare what we’ve got now to what we’ve got to look forward to between April and June I wouldn’t blame you for wishing the next few weeks away. It’s still a little early to have completely decided what I’ll be watching for Spring 2017 so here is my ‘preliminary’ list of shows I’m interested in.

Is it wrong to try to pick up girls in a dungeon: Sword Oratoria

The original season of DanMachi was a lot of fun, if slightly lacking in any solid plot. I’m excited to see how they develop the world in the second season as that was one of my favourite parts first time around. I’d like to see the return of the original cast in some way as I actually thought they were really good, but if there’s a good alternative then I guess I’ll get over that.

One of several shows we don’t know lot about next season. Based on an ongoing light novel series by Yuu Kamiya and Tsubaki Himana. It’s tagged as Sci-Fi and Fantasy which could mean anything, but I’m always interested in the artificial intelligence concept so will be checking this one out this month.

END_OF_DOCUMENT_TOKEN_TO_BE_REPLACED 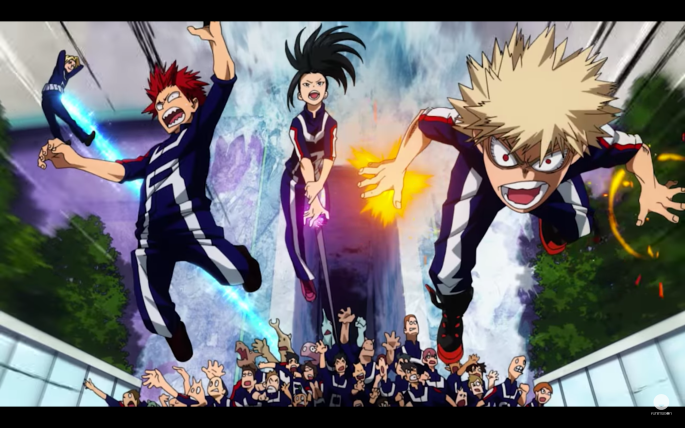 If there’s one thing I like to write about, it’s how we all actually watch anime. I’ve talked at length about the places you can go online to watch anime legally, the places you can go to buy Blu-Ray and DVD copies of anime. I whole heartedly believe that the best and easiest way to contribute to our favourite shows is buy paying to watch them, the amount of piracy surrounding anime is astronomical and for the most part it’s not even difficult or time consuming.

Don’t worry though. Today I won’t be preaching about why you should spend your hard earned money on expensive hard copies or even telling you to sign up to the big subscription services. Instead, I want to tell you how excited I am the start of simulcasting English dubs by Funimation. 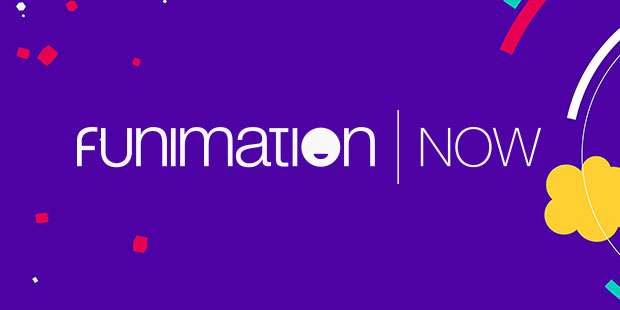 I feel like I should first say, I don’t particularly like Funimation as a company. This is mainly because I live in the UK and Funimation treats it’s non-North American users like trash. Over here we got access to limited selection of their catalogue last summer. If you consider that to be a good thing, the American site is now region locked so if you want any news or updates you have to rely on social media – because of course British and Irish users don’t need to know what’s going on with new acquisitions, dubs and voice actors. We just get told that we have a ‘slightly-more-active-than-before’ website and we promise we’ll get the rest of the apps to you soon that you were meant to have last year kind of a thing (and deep breath). And if you don’t live here, my understanding is you still need a VPN to get anything.

END_OF_DOCUMENT_TOKEN_TO_BE_REPLACED

And to think I was disappointed with Mugi last week.

This weeks episode of Scum’s Wish saw the culmination of the plan for our two protagonists to confess to Akane and Narumi. And in a totally unsurprising turn of events, things did not turn out how Hana and Mugi expected them to. What’s worse is that Mugi – who takes the role of colossal anime idiot #1 – was completely aware of the situation, but went ahead with it anyway.

END_OF_DOCUMENT_TOKEN_TO_BE_REPLACED

Last night I attended the packed screening of A Silent Voice at the Exeter Phoenix which was being aired as part of the Japan Foundation Touring Film Programme here in the UK. For any of you who happen to find yourself in that part of the world, it’s a quaint, arty cinema which is incorporated within a larger arts centre that I can happily recommend. That said, if the women three seats to my right who was on Facebook for the duration of the film is a regular I think I might be a little put off in the future… anyway – I’m getting sidetracked.

A Silent Voice, or Koe no Katachi as it is known in Japan, is not an easy film to watch. The themes it covers are wide ranging but generally focus on the culture of bullying in the Japanese school system. As a result of this, the film draws upon ideas surrounding depression, dealing with disability and ultimately suicide. Knowing that then, it might surprise you to know that I found the parts of this film that focused on bullying much harder to watch than those that focused upon the resultant depression – I’ll come to why after I explained the plot and some of my more general thoughts around it.

END_OF_DOCUMENT_TOKEN_TO_BE_REPLACED Ah, shit. Now every member of the cast is officially in the gutter.

I feel like I say this every time I write an episode focus on Scum’s Wish, but this show is grim. Before this episode, the only example of happiness so far has come via Akane’s twisted satisfaction with ruining Hanabi’s dream of a perfect first love with Narumi. Episode 7 gave us a second, equally distasteful, moment as Moka apathetically dreams her way into a perfect date with Mugi.

END_OF_DOCUMENT_TOKEN_TO_BE_REPLACED I’m slowly working my way through the second season of Code Geass. I watched the first season ages ago and although I enjoyed it, I didn’t feel any particular need to watch the follow up. The prospect of season three sometime this year, however has given me that little push to get going with this season – which according to most, is brilliant.

Episode 5 sees the return of Suzaku, now a knight of the round and direct subject of the Emperor of Britannia. His arrival was seemingly prompted by Zero saving the Black Knights from execution in the previous episode. I was surprised all round with this episode: it seemed quite out of character for Lelouch as well as the show as a whole.

END_OF_DOCUMENT_TOKEN_TO_BE_REPLACED

About three weeks ago I wrote a first impressions for the Winter 2017 season and to be honest, I wasn’t that impressed. With one exception – Scum’s Wish (or Kuzu no Honkai).

Five episodes later I can’t say anything else from this season has grabbed me at all but Scum’s Wish is proving that I was right to be excited about it. From the outset, you could see that it was a show that was going to be dark, depressing and devoid of any hope or redemption for it’s main characters. Not only has this tone been maintained, but episode 5 has definitely been the darkest so far.

This episode is one full of desperation. Hanabi is desperate for anyone to the point where it has become hard to tell if she still has genuine feelings for Narumi at all. After sleeping with a past lover, Mugi begins to question the extent for his feelings for Hanabi which, of course, are thoroughly rejected in the way that we have come to expect from our lead female and narrator.

END_OF_DOCUMENT_TOKEN_TO_BE_REPLACED

If you’ve been around for a while you’ll probably know that I’m really big on finding ways to contribute to the anime I love by finding legal ways to watch them. On several occasions I’ve talked about different streaming sites that you can use to watch anime. Today though, I won’t be talking about streaming, but buying – my absolute favourite way to watch an anime. And what better way to do this than with the magnificent Your Lie in April.

Your Lie in April was produced by A-1 Pictures and aired across Autumn 2014 and Winter 2015. It’s western release is finally here courtesy of Aniplex (though I think it got a US release sometime last year?) and for me in the UK, All the Anime.

Having seen the series in Japanese a while ago, I thought I’d give the dub a go this time around and I’m happy to say, so far, the voice actors have done a really good job. It’s always difficult to say if the dub beats the sub, but suffice to say if your preferred way of watching is in English, then Your Lie in April will be very watchable to you. 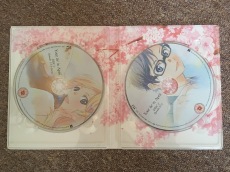 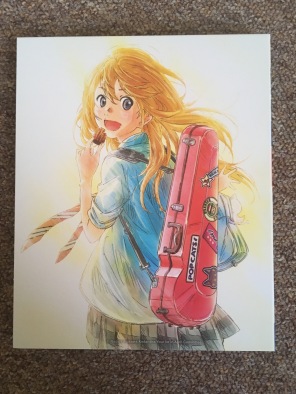 The release comes in a nice art box and digipack and includes two discs. It also has space for the second release which is scheduled for  the 27th February in the UK.  I don’t have many problems with the release, the art on the box is beautiful and all of the boxes feel nice (though, thanks Amazon for damaging the corner of my box…). However, the one problem that really bothers me is the fact that the digipack is squeezed into it’s case so tightly! It is possible to get it out without damaging it, but I’m sure that someone out there has ruined their set completely by accident.

END_OF_DOCUMENT_TOKEN_TO_BE_REPLACED

Over the past two weeks the Winter 2017 season’s shows have been airing their first episodes and the anime community has reacted largely with disappointment. Unfortunately I can’t help but agree with the majority of people and say that original shows this January are a huge let down – though there are some big name titles getting sequels that have helped lessen the issues (KonoSuba, Blue Exorcist and Chaos;Head most notably).

On the one hand we’ve got some bland rom-coms like Masamune-Kun’s Revenge (if that’s even a romance!?) or Fuuka (which I’ve yet to start but appears underwhelming even from the promo material). Then at the other end of the spectrum we’ve got ridiculous fantasy shows epitomised by the abhorrent Hand Shakers (the article on that one will be scathing, I promise).

But this evening I saw the proverbial silver lining to this season in Scum’s Wish or Kuzu no Honkai. Having seen and then ignored the manga on Crunchyroll, I was eager to have a look at what sounded like an interesting premise for anime adaptation.

END_OF_DOCUMENT_TOKEN_TO_BE_REPLACED

So after writing my little update earlier today I thought I’d have a look across the anime WordPress world (something I should clearly being doing more often!) and I came across an anime blogging challenge that I thought would be a lot of fun (thanks to Avathenerd at Reads, Rhythms and Ruminations)!

The challenge is to write 30 articles regarding different aspects of anime over the space of 15 weeks. That means I need to write, on average, 2 a week. Knowing me, I probably won’t write 2 every week reliably, but I’m going to finish! 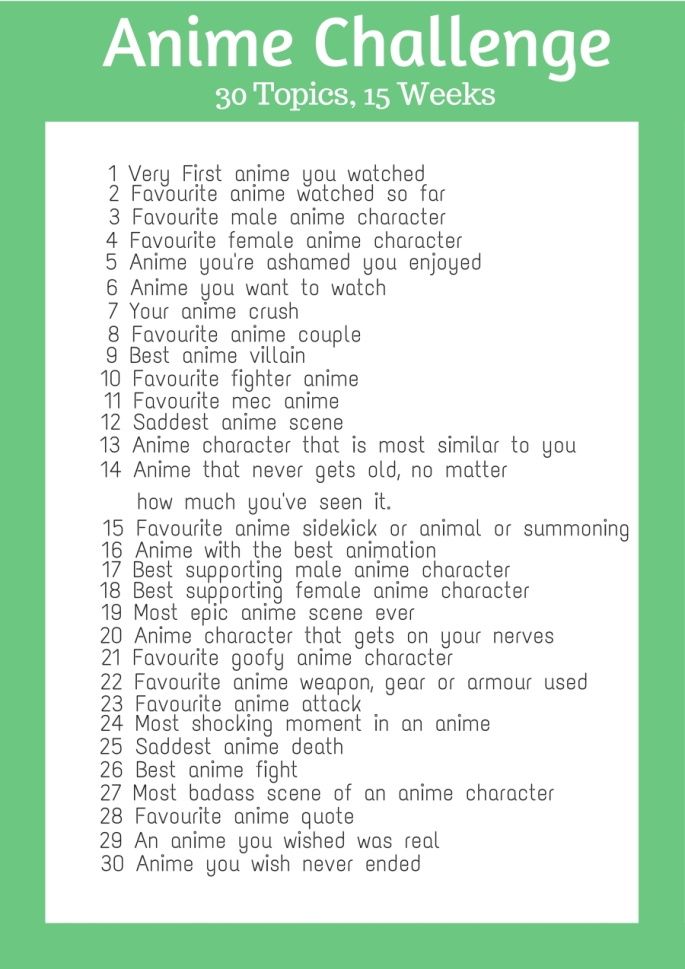 Number 1 is the very first anime I watched – I’ll probably get started on that tonight but I’d be surprised if it goes up before tomorrow. Of course, this doesn’t mean I’ll only be doing the challenge, so there’s plenty of other articles that I’ll be writing around this.

The Tiny World of an Anime Amateur
Create a free website or blog at WordPress.com.
Loading Comments...