I’m not actually one of the people that think Titans are the most important aspect of Attack on Titan. I’ve always thought that the relationships between the characters and the fear they feel by being trapped is much more interesting than the humanoid, man eating giants themselves. That said: they’re still pretty cool.

When I came up with the one I wasn’t entirely sure if I wanted to choose a mindless titan or a human titan. After all, just because of the two, possibly four human titans we’ve met so far in the show are the most intelligent it doesn’t mean they would have to be the ones I like the most. I mean look at Hange’s favourites: Sonny and Bean! As usual though, I’m just go to ignore my explanatory speel and go for one of the human titans anyway. In season 1, for me at least, the best titan has to be the main antagonist of the second half, the Female Titan.

Unlike the Armoured or Colossal Titans, the Female Titan does not have any distinguishing features that make her more powerful, rather her key trait is that she is not a he (I have always found this odd because there are other titans that appear to have a female form, even though in flashback to a cadet lesson the instructor says they’re all male…). However, that does not mean she is just an average titan.

Firstly, she is much faster than other titans: at least as fast as the Armoured or Eren, if not faster, watching her speed as she chases down Eren and the Levi squad is quite exhilarating towards the end of the sequence in the forest. To be honest however, the reason I went for her isn’t because of any innate titan ability but more because of what the human inside brings to the table. I’ll refrain from saying who it is, just in case you haven’t seen the whole season somehow, but it is clear from just watching her titan form that this is someone who is determined, resilient and skilled in combat. The determination and resilience I mention is most apparent when it appears that Erwin has got the better of her (remember my post when I wrote about why he was the best side character), but before they can cut inside to find out who the culprit is, the Female Titan signal to all of the regular titans around, causing them to come and eat her alive, providing her with a safe passage away from the Scouts.

She is probably the titan most similar to Eren in terms of build and determination. The most obvious difference however, as we see in episode 20 and 21, is her personal hand to hand combat abilities as well as her knowledge of her titan powers. We see her focus her regenerative abilities to one eye so that the Levi squad are caught off guard when she attacks, and then when she is fighting Eren, she is able to freeze her hand to deal a crushing blow (see what I’ve done there everyone?!). 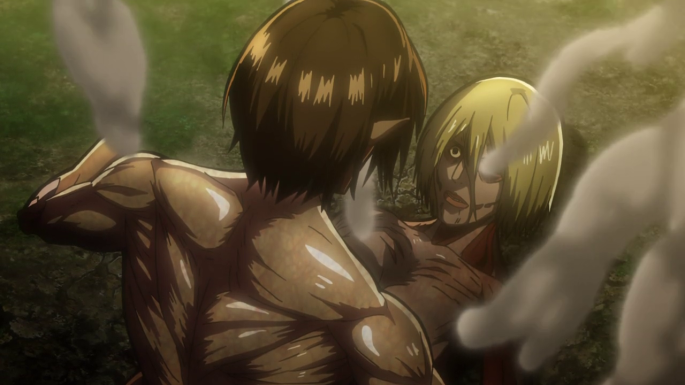 Of course, she is the titan we get to see the most of throughout the first season so there’s nothing to say that other titans that we have seen already, or titans that we’ve yet to meet, might in fact be even more devastating.

What did you think of my decision of the female titan as number 1?Who was your favourite titan? Did you take a liking to one of the unique titans, or were the mindless man eaters more your thing?

2 thoughts on “The Attack on Titan challenge #5 Favourite Titan”