So you’ve stumbled across this blog knowing nothing about anime or you’re just looking for some recommendations for shows to start with. Lucky you, because I’m going to share my top 5 shows that every anime newbie should watch. These aren’t necessarily the best shows, but they do cover well liked and accessible areas that will help you decide what other shows you might like in the future.

Not everyone likes Sword Art Online, in fact the ‘serious’ anime community (whoever they are), actively dislikes it. That said it’s actually very popular, and for good reason. Think swords, fairies and dragons – plus it’s based within a game. The themes of the show open it up to pretty much anyone and it’s a good example of great anime artwork.

END_OF_DOCUMENT_TOKEN_TO_BE_REPLACED

At the end of the last episode the inevitable happened, Yu and Mika met each other again. Perhaps unconventionally so in as much as Yu stabs a cursed gear through Mika’s chest. That left us all waiting eagerly to the resolution in this weeks episode.

What becomes clear from this episode are two things: firstly, Mika sees his relationship with Yu as somewhere on a fine line between brothers and lovers and, potentially more importantly, Yu has something else to worry about that may be even worse than his own demon, Ashuramru.

This is another high intensity episode as the vampires led by Ferid and Crawley continue the fight against the human army.

END_OF_DOCUMENT_TOKEN_TO_BE_REPLACED 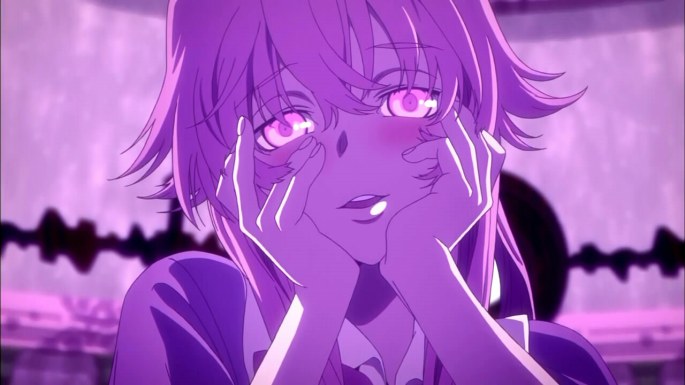 This article will contain spoilers surrounding the nature of certain characters.

Recently I’ve been watching the anime The Fruit of Grisaia. In the first episode of the show a girl introduces herself to the main character and tsundere, and it got me thinking. If you went onto CrunchyRoll for the first time last night and decided The Fruit of Grisaia looked like a good first anime for you (hint: I’m guessing you wouldn’t), would you not be completely clueless as to what a tsundere was?

You might, like me, have a little bit more experience and begin to notice that certain character types come up again and again. So, allow me to shed light on some of the ‘dere’ character types and point out some examples from popular and ongoing shows.

In Japanese, ‘dere’ comes from the word ‘deredere’ which essentially means lovestruck (the internet takes credit for that, my Japanese is non-existent!). So all of the characters in this article would be involved in love/romance in some way.

Perhaps the most common type of ‘dere’ character is the one I’ve already mentioned: the Tsundere. On the outside these are characters that are cold, hard and rather lacking in positive emotions, particularly towards their love interest. At certain points or after a significant event however, these characters will come out of their hard shells to show a kinder, more sensitive side.

If you’re looking for a well established tsundere character, a good place to start would be Rin Toosaka from the Fate series. As for shows that are currently airing, I’d suggest watching Owari no Seraph to see Mitsuba Sanguu – though she only appears from episode 7 – she is the absolute picture of the tsundere type.

END_OF_DOCUMENT_TOKEN_TO_BE_REPLACED

As you might have seen a couple of weeks ago I posted my first First Impressions article. Looking over the internet, it seems to be a pretty widely used format for overviewing the first few episodes of a show. However, the most important form of reviewing, in my mind at least, will be always be the season review – such as this one. Why? Because the start of a show can misleading, it’s often the case that a show with a bad beginning can improve in the latter episodes, or, as is the case with Absolute Duo, a promising show can make a turn for the worse.

The premise is as follows: a group of selected school kids have been given the power to materialise the essence of their souls as weapons, called blazes. At the school, the students, known as exceeds, work together as duos, living and training together. The story focuses on a boy called Toore Kokonoe and his duo partner Julie (u-lee-a) Sigtuna as they navigate the beginning of their school lives.

The point of the story seems to be the development of Toore and his relationship with Julie. We get a problem with the plot after episode 3 when events are completely ignored in favour of starting new plot lines which only seem to bring more girls into Toore’s life for no other reason than this is harem show and it needs the main character to be loved by girls. The truth is I don’t mind a good harem based show, but Absolute Duo wasted what was looking like a deep and serious plot.

END_OF_DOCUMENT_TOKEN_TO_BE_REPLACED

In the past few weeks amongst the new and intriguing anime I’ve decided to watch I’ve been watching some of the most hyped and best rated anime out there. The amount of shows rated 10 on my My Anime List profile has increased by 200% (that is to say there are two more), since the start of May. Carrying on the trend of watching these supposedly incredible shows, I watched Steins;Gate. Is it as good as it’s #2 ranking on MAL would suggest, or was I about to be tragically let down?

The show focuses on ‘mad scientist’ Rintarou Okabe (aka. Hououin Kyouma)  and his friends/lab members in their attempts to discover time travel and the subsequent consequences it has on their lives. The show begins when Okabe and his childhood friend Mayuri visit a conference on time travel only for Okabe to discover a young scientist, Makise Kurisu dead. After sending a text telling another of his friends, Daru of the death, he miraculously finds Kurisu alive.

You can pretty much split the show into two halves, the first being the group’s attempt to find out how to time travel, the second being dealing with the consequences of messing with time.

In terms of genre, Steins;Gate, is all over the place. Principally it is a Sci-Fi comedy. That doesn’t really cover everything though, at times it’s dramatic and it can’t help but lean towards a harem at times. The scientific happenings can surely be described as supernatural with the affects of time travel being very psychological. Jack of all trades or what?

END_OF_DOCUMENT_TOKEN_TO_BE_REPLACED Things are really starting to hit crisis point in Sword Art Online II in episode 9. Death Gun has made an appearance in BoB, killing one player before disappearing.

One of the noticeable things about this episode is that, for a supposedly high action episode, there is a lot of talking and not all that much action. The episode quickly become about finding and stopping Death Gun before he kills anyone else. However, getting from the bridge to the city in which Death Gun is located takes the whole episode- what’s the problem with that you ask? Well in amongst this travelling is some talking amongst Kirito’s SAO friends about how bad Death Gun probably is, Sinon having a bit of break down about the possibility of dying and Kirito himself becoming so ridiculously OP in what comes across as showing off in front of Sinon.

That isn’t to say this isn’t an enjoyable Sword Art Online episode. The artwork and animation is as crisp as usual, and that over powered sword fighting I mentioned from Kirito, it is pretty cool. Sinon’s ongoing fear of the incident in her childhood is managed reasonably well and works really well with the cliffhanger at the end of the episode.